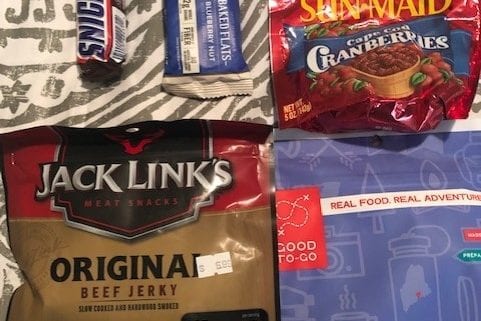 One of the most frequent questions we get is, “What do you eat?” Well, we eat a lot and often. Keeping the body fueled is almost as important as drinking plenty of water. Generally, the average hiker carries two pounds of food for every day between resupply. Some carry as much as a week, our most has been five days. Plus, we have learned to carry an extra day of food to prevent running out, which we have heard of and talked to hikers that have had this happened.

For us, we eat five times a day. Our first breakfast is either oatmeal or breakfast flats. After we have hiked for a couple of hours we have a second breakfast that consists of Belvita biscuits. These biscuits give us another two hours of fuel and taste great. Lunch is usually beef jerky, raisins, and trail mix.

Our midday snack is a Snicker Bar! This is the highlight of my day. The commercials are true about Snicker bars, they really do give you extra energy. We usually save this to eat just before a steep climb. Other hikers eat Skittles or Starburst for this extra energy. If we walk past five, we will have another snack before we make camp.

Dinner in camp for me is the same as lunch. Others boil water and pour it into a prepackaged meal. While prepackaged meals taste great and provide a lot of calories, they contain a lot of sodium. Cooking also adds time to set up camp, which can take an hour. Many hikers send their stoves home and eat those things they can out of a package.

We eat a lot because we burn a lot. If we hike thirteen miles or so, we have expended well over five thousand calories, including the amount the body needs just to survive. Some hikes burn as many as eight thousand calories in a day.

It is hard to eat this many calories and most of us suffer from a deficit. So when we hit the town, we crave burgers, fries, and beer. Some hikers look for, “all you can eat buffets” and have three to four plates.

Being older hikers, we have to be careful about what we eat. Our bodies don’t process food as well and we are far more susceptible to hypoglycemic reactions. For older hikers, walking on an empty or poorly fed stomach will show up. Causing irritability and fatigue. Early on we discovered this and had to adjust. Now we never hike for more than two hours without eating. We make sure we get a healthy balance of carbs, fat, and protein. Maybe we won’t eat the French fries in town, trading it off for Brussel sprouts.

We admire the younger hikers, who order hamburgers with four patties and fries covered with bacon and cheese. I am always so envious of what they can eat. I draw my line at beer, and always have one when we are in town. The twenty-year-old’s eat whatever they want and still hike many miles the next day.

Try as hard as we can, we still lose weight. We met one hiker that had lost twenty pounds in four weeks. The average at this point of the trail is around ten pounds.

The issue with food is also with the weight you have to carry. Thru-hikers discuss their backpack weight in terms of total weight and base weight. Base weight is the number of pounds for everyday items; like sleeping bags, clothes, tent, electronics, and personal hygiene items. Our base weight, including the weight of the pack, is around twenty pounds.

Total weight includes food and water. If a hiker is carrying seven days of food and two liters of water, this adds eighteen pounds; four pounds for the water and fourteen pounds for the food. Bringing the total pack weight to between thirty-five and forty pounds. A very heavy pack!

We don’t carry that much, at most five days of food and usually only a liter of water. So at most for at least one day we carry around thirty pounds. As we eat our food and drink our water the pack weight goes down considerably, almost to the point where we feel like we aren’t carrying any weight.

We don’t carry as much food, because we are in towns a lot. We have the resources to be in town more often and love visiting these small towns. We don’t carry more than a liter of water, because there are many streams to replenish and we love the break.

Most hikers resupply when they get into town, but some have a person who sends them food via the post office. Before they left they created twenty or so packages that they have a friend mail to a designated town.

Others of us visit the local grocery store. So far, we have found that this is easy and most stores have what we need. In general, the stores in these towns know we are coming and are well supplied with hiker food.

Eating on the trail, for some is an event much like at home. They break out their portable stoves and enjoy their meals. For others, it is a functional necessity to stay fueled. On the days we hike, the key is to eat often for the fuel. On the days we are in town, to the goal is to store up calories.

The stoves people cook with range from small homemade cans surrounded by a windscreen. A little white alcohol fuels the can and creates enough heat to boil water. Some have very fancy Jet stoves that almost instantly boil water. The trade-off in the stoves is the simpler the stove the less weight. Because we like to keep the weight of our packs down, our stove is simple and small.

Food is important on the Appalachian Trail and many hours are spent learning and discussing what works and what doesn’t. We all develop our own method over time and find out what works.

We pray over each meal, thanking God.

Using Faith to Go on Our Way

Serious and Focused on Being A Servant Scroll to top