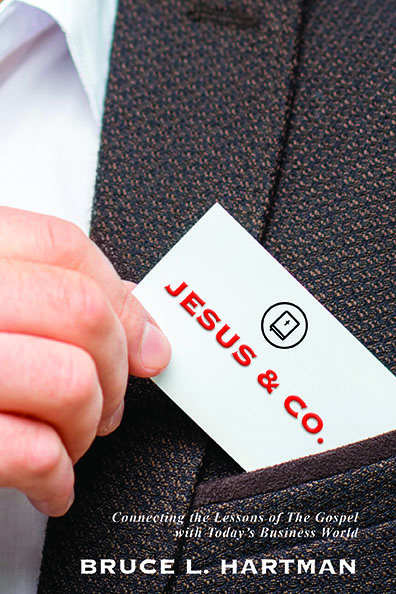 Jesus & Co. – Connecting the Lessons of The Gospel with Today’s Business World

Jesus & Co. presents a radically different way to bring Jesus and the Gospels to our work lives. Learn how to not only survive, but thrive while swimming with sharks that surround us each day in the workplace. A very hopeful and encouraging book written by a former Fortune 500 “C” level executive, who completed seven years of theological education to receive a Doctorate degree in Ministry. Jesus & Co. presents the blending of both these worlds in an extraordinarily practical way to help other working Christians.

Jesus & Co. uses the exact words spoken by Jesus and compelling historical evidence to bring Jesus alive in a very different way. Jesus becomes accessible and real, by connecting His words and the ancient Judean marketplace with inspiring business people from the 21st century.

Jesus & Co. is a journey through time and the lives of Jesus and marvelous Christians.

Also Available from these retailers

Late at night in an ancient Judean garden, a man in his early thirties asked, “Are you sure this is the only way?”

It was the third time that evening the young man had returned to the garden, each time with the same request: “Are you sure?”

He was met by silence, but the answer was clear. The fullness of his humanity exposed, he was sweating to the point of bleeding. “Not my will but yours,” he reluctantly assented. He knew what lay ahead. Betrayal by his friends and humiliation in front of his community. An agonizing beating that would tear the skin from his back. A trek carrying his cross to a hill. Death by crucifixion. All this he and he alone had to undergo in order to connect humanity with God. In fact, he was creating a flower for humankind called Easter.

Many times in our work life, we face difficult choices, such as the choice between acquiescence to an unethical request from a boss or colleague and doing what’s right. We are frequently tempted to take the easy way, to relieve the pressure on ourselves, to dispel the tension, to avoid the moment of having to deliver a tough message to our superiors and to disobey them. The walk to the boss’s office will seem endless. Each breath and thought will hang thickly around us, almost choking us. But we have a choice; we can do the ethical thing, and we have the example above, of Jesus in the Garden of Gethsemane on that fateful night, to show why this is the choice we should make.

Jesus and His Mission

This book isn’t about “believe or be doomed.” It is about a journey with Jesus. A walk with Jesus that reveals God’s values for our personal and work lives. It is for the vast unserved community of the marketplace looking for a way to create straight moral paths in their work and personal lives. It is for those seeking a change in their hearts to pursue God’s way and God himself. For we follow God with our hearts and souls. It is our egos that pursue the world’s temptations.

Jesus was around thirty when he was baptized and then spent forty days in the wilderness, where he faced and overcame trials and temptation. Jesus was then free to begin his mission to reveal God’s values to humankind, and specifically morality and ethics for the first-century marketplace.

In essence, Jesus’s moral emphasis was on “self-worth, not net worth,” and it was a message he preached in the Judean and Galilean markets. These were the places where daily life happened. People worked and struggled to earn a living. They bartered, sold their goods, created artifacts from shoes to ceramics, made money or lost it. They were prey to con men and cheats, and as in markets today, they were often exploited by men cleverer and more unscrupulous than they. They battled throughout their lives to rise above the temptation to get back at the offenders and avoid falling into the traps of greed and fear. When they had turned in the past to their religious leaders for help, they had been provided with legalistic answers—no help at all.

What is not widely discussed is that prior to his baptism and experience in the wilderness, Jesus had spent most of his life as a marketplace worker, a carpenter, a craftsman, a skilled artisan. We know from the earliest version of the Gospels that his profession was tekton, an honorific term for “artisan,” usually associated with a carpenter, builder, or woodworker. He would have attained this level by initially learning his craft from his father, as was the custom in the first century, and then becoming more involved with other tradespeople. Over time, he would have progressed as a woodworker to the level of tekton, now able to help support his family and pay his bills.

Into this commercial world Jesus went to teach people to do good. To do good—not to gain something of material value, but to be something of value.

Jesus’ Views On Earning A Living

Jesus is often believed to have said that earning a decent living is wrong. What he actually meant was that the covetous pursuit of money is wrong. He wasn’t against earning a living; Jesus was against earning a living by defrauding our neighbors and moving away from having a relationship with God. Jesus knew that families and individuals needed money, and that they had to work for it. In fact, as an artisan, historians suggest that Jesus probably earned a wage comparable to others of his day. Jesus knew and knows we all have to pay our bills.

Jesus was also a friend of the wealthy. Two rich benefactors, Nicodemus and Joseph of Arimathea, not only provided him with support, but were responsible for his tomb, and the perfumes and shroud needed for the burial. Jesus wasn’t biased against any social group, he was biased toward those who lived for God, who loved God and their neighbor. Both Nicodemus, who interestingly was a Pharisee, and Joseph had engaged with Jesus in seeking the truth. Both men learned that truth. Both men, who were from the elite, showed that even though they were part of the structure Jesus was trying to change, they were people who pursued God and wanted a different life.

Jesus knew the value of hard work. He was more concerned with citizens who did not have a giving nature, who protected their assets when others were in need. He was interested in a person’s self-worth, not net worth. Jesus loved a generous heart.

It’s difficult for us humans to imagine Jesus’s thoughts. At Gethsemane he was all by himself, wrestling with which way to go. He turned to kenosis, knowing full well that God had given him only one path to follow. The process took deep prayer. Three times he went and knelt humbly. Three times he searched for a different path. Three times Jesus’s inner human thoughts shifted from himself to God’s will, and finally Jesus submitted in humble obedience to do what God had asked.

Through kenosis, Jesus embodied a loyal and faithful employee. In order to serve God Jesus surrendered the natural human tendency toward personal interest. There was a job to do, and by doing his job, Jesus would be connecting humanity with God. By giving up and draining himself of personal ambition for the team, he became an effective worker on behalf of God.

Jesus, The Model For Networking

Jesus knew that networking was about giving, not getting. If he was to fulfill his mission—to save the world—he needed humankind. In John [5:30], he said “I can do nothing on my own. As I hear, I judge; and my judgment is just, because I seek to do not my own will but the will of him who sent me.” Jesus knew he needed to be a model networker to help people, who in turn could help his mission. Anyone was a candidate for his help, not just the rich and powerful, but also people on the margins.

Jesus created the model for delegation, as is evident from the remarkable growth of his Way, now called Christianity. Jesus looked for the right people he could assign the tasks of growing his organization. He taught while he was delegating. He didn’t use dictatorial management techniques, he asked “what do you think?” He got to know those he sent forth and helped them learn the nuances to be successful. He was willing to walk where he was sending his flock.

Jesus, The Life And Business Coach

“I am the way, and the truth, and the life.” This is a hallmark Christian thought; it implies that through Jesus we experience God’s values in our personal lives and in the marketplace. The statement “I am the way” represents many aspects of Jesus: Jesus as God’s intermediary, the model of sacrifice, a way of loving God and our neighbor, a way of unwinding the ethical dilemmas facing us in the marketplace—a way of living life.

Who is Jesus to our current marketplace? He is a bestselling author. He is the founder of the largest organization in the world. He worked his way up from the bottom in the marketplace. If he booked a speaking tour in contemporary times, he would sell out every venue on the tour. He is a gifted strategist and keeps the road straight. He has been there and knows our issues. But most importantly his words and presence are as available to us today as they were for the first-century marketplace.

How do we get on Jesus’ schedule for a session of life coaching? How do we develop a relationship with Jesus that becomes intimate and helpful? How do we tap into his way as a guide to help us with our customers and colleagues? Simple. Read the Bible, and specifically the Sermon on the Mount (Matthew 5–7), and develop a personal relationship with Jesus through prayer. Jesus will be there. Remarkably, Jesus is present today in both his teachings and through prayer.

Jesus & Co. – Connecting the Lessons of The Gospel with Today’s...
Scroll to top