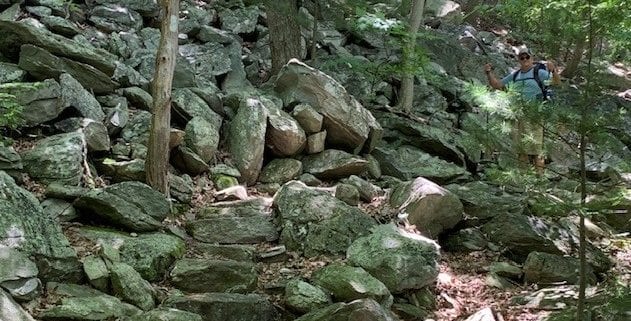 The Geology of the Appalachian Trail

We decided to take a one week vacation from walking the trail. After arriving in Pennsylvania, our seventh state, we found our knees worn out and suffering from our third sickness. We will be skipping the rocky terrain of Pennsylvania and moving up to New Jersey to stay on schedule. We will come back to PA in the fall.

In just a few days of resting, we found ourselves missing our trail life and having a defined daily purpose. We missed the other hikers we have grown to know and the simple daily existence. But we found our ankles and knees were sore from the daily grind. Before we took our mini hiatus we had walked almost 14 days in a row. Mostly finding rocks that litter the trail.

We had been told that when we hit Virginia that the trail got easier. Certainly, the climbs were lower and our legs were much stronger. But we kept asking ourselves, “when does Virginia get easier?” The further north we walked, the greater the number of rocks and large boulders. Slowing our pace and creating unwanted falls. One day, in particular, we had to descend a half mile rock fall. A steep drop where each step had to be strategically thought out. It made me wonder, why the difference in terrain conditions versus the southern part of the trail.

In my research, I discovered why.

It wasn’t that the trail was less maintained, but by the geology of the trail. The Appalachian mountains are close to five hundred millions years old. Some geologist claim they are the oldest mountains in the world. They are four times as old as the Rockies and the Sierra Nevada’s.

Erosion and glaciers have reduced the size of the Appalachian mountains over these many years and created the steeper up hills and down hills. The average grade on the trail is over two hundred feet per mile, while the Pacific Coast and Continental Divide trail are far less, at over one hundred feet per mile. While the Rockies are higher and its largest peaks are fourteen thousand feet high, the trails are graded to handle livestock movement. As such most climbs are no greater than 11%. Whereas on the Appalachian Trail, many climbs are 20% in total with some sections reaching 40%!

So while the highest point in the Appalachian Mountains is Mount Mitchell at 6,600 feet, the steepness of the grade is the difficulty. Added on to this is the many years of erosion and the effect of numerous glaciers.

The erosion in the southern part is not as severe as the northern part, as the glaciers only reached the Ohio Valley. Their effect was to remove the topsoil and leave the rocks. Many of the rocks were pushed forward during the many ice ages. When you look at the topography of the Appalachian Trail on a map, which we did in Harpers Ferry, you see the Appalachian mountains are wider in the south and generally much higher.

The northern two states, Maine and New Hampshire, have some high peaks but are generally a thousand feet smaller. What these two states do have are much steeper climbs. In many places the climbs are over a thousand feet per mile, making both the ascent and descent hard. Even experienced hikers slow to a pace of one mile per hour.

What we discovered in Virginia was not an easier trail, but a different trail. Our new obstacles were granite rocks that were left behind from the erosion. We also discovered the ridges were narrower and the valleys more fertile. Farms dotted the landscape and on some days we even walked through farms.

As we entered the three states of West Virginia, Maryland and Pennsylvania, the rocks became more frequent. The boulder fields were longer and bigger. In the southern part of Virginia and Tennessee, we could easily walk well over 2 miles an hour, or the average speed of the typical hiker on the Appalachian Trail. We actually slowed going north to just at 2 miles an hour. While not as exhausting as the steep climbs in the south, our hiking is more technical. Each step has to be carefully watched.

What we have learned is not to trust the small rocks, they will move and cause you to roll your ankles. Connie discovered that looking for the big boulders and charting a course among them was far easier. When the rocks are wet, they are greasy and rounded or sharp rocks need to be avoided or a slip and fall will occur.

So while we were told, when you hit Virginia the trail gets easier, we did not find this to be true. Sure the climbs weren’t as high, but the walking was harder because of the rocks. While our legs are much stronger, our walk is more measured.

We missed the trail and have returned this week. We needed the time off, to rest and let our knees recover. Our lesson we learned, is to be more careful with what we try to accomplish. To be more careful in planning out our days. To bring to the trail more from the outside, like friends and our other interests. A blending of the outside world with trail life.

Gaining Our Site Through Jesus

Walking the Length and Breadth of our Faith Scroll to top