“The works of hands are faithful and just; his precepts are trustworthy”

Abraham Lincoln left his family at the age of twenty-one and became a store clerk in Salem, Illinois. He earned a reputation as being honest and sociable. To help defend this frontier outpost, he joined the local militia. To his surprise, after one year he was elected by the other members of the militia as their captain. A remarkable achievement for a twenty-three-year-old who was new to town. In a very short time he gained a reputation as a man of integrity, and his famous nickname, “Honest Abe,” was given to him during this period of his life.

Many of us from the marketplace are faced with the question of integrity on a daily basis. How do we handle a client’s money? Do we reveal everything or hold back important information? Do we consider ourselves justified because everyone else does it? We ponder and debate. We look for answers from within our hearts. We’re under pressure to complete a deal, to give our boss the right answer. We are constantly besieged with these crossroad decisions.

I was recently confronted by a supplier to pay for more work than had actually been completed. I knew he was wrong, but I paid him anyway. His attitude was that of entitlement. I had noticed that over time he had become more difficult in his billing practices and a little more forward in his requests. After I handed him the check, I decided to end our relationship and began to use other suppliers. After a while the man complained that I wasn’t giving him any business. I advised him I had found another supplier. He never asked why; he just got angry and stormed off.

“A good name is more desirable than great riches; to be esteemed is better than silver or gold.”

When we view our relationships from only one side, we find it harder to be honest. We begin to feel entitled and justified. We cross the boundary of fairness. Our short-term gains turn into a crisis of reputation. It happens slowly. Customers leave without telling us why. People begin to avoid us. Our reputation becomes a hidden curse. Proverbs 22:1 reminds us of this, “A good name is more desirable than great riches; to be esteemed is better than silver or gold.”

When we treat our neighbors with respect and honesty, we may suffer short-term financial setbacks, but we build long- term relationships. Recently, I needed a moving company and asked around. I was told to use Company X, they were the best and most honest. I called them, and in our conversations, I asked, “Why don’t you advertise?” The company representative’s response was “We have more than we can handle from our referrals.”

What are the questions we ask ourselves about fairness?

How do we resist the temptation of the short term?

How are your referrals? 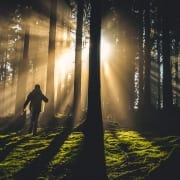 “But those who do what is true come to the light, so that it may be clearly seen that their deeds have been done in God”

Chris Gardner, the real-life main character in the movie The Pursuit of Happyness, was at one time homeless, a foster child, a single dad, and penniless. He rose to be one of the first African-Americans to start a brokerage firm. When asked, “Where did you discover your faith?” He replied, “My mom, I chose to embrace the light I saw in my mom.” He goes on to say he could have embraced darkness like the other young men from his neighborhood but chose instead to embrace the light of Jesus.

Life wasn’t easy for Chris. An abusive stepfather forced him at times to live in a foster home. He enlisted in the navy and then moved on to start a business, selling medical devices. His business failed and his wife left both him and his two-year-old son. He then entered an internship program with Dean Witter, a brokerage firm. Unpaid for six months and with only a 5 percent chance of getting hired he sold all he owned. Along the way he and his son were evicted from their rented apartment, thrown out of a motel room, and slept in a subway station. He never gave up on his dreams. He followed “plan A” and embraced the light. Outwardly he expressed a positive and trustworthy attitude that allowed him to gain clients for his firm. He was unfailingly optimistic and faithful, and as you would guess, he became the stockbroker he wanted to be.

Seven years later he started his own firm. After twenty-five years of running a successful business, he sold his business and became a philanthropist and an inspirational speaker.

“Embrace the light of Jesus and press on. We are tested by obstacles. When we surmount our obstacles, we signal to God that we have faith.”

The last Gospel, John, encourages us to embrace the light. Light being many things that are good, but most importantly being the light of Jesus. The book of John uses the imagery of light as a contrast to darkness. Darkness representing evil, materialism, and a disregard of our neighbor; light being “the way” and an option to despair and broken dreams. When we have obstacles that prevent our path to the dreams we hold dear, the Gospel of John reminds us to embrace the light of Jesus and press on. We are tested by obstacles. When we surmount our obstacles, we signal to God that we have faith.

In the marketplace we are often confronted with compromises and shortcuts. Our dreams become diminished. We go along to get along. Our plan A becomes plan B. Chris Gardner’s plan was simple: do what gave him passion and be a good dad. He put this plan under the light of God. He succeeded and achieved his dreams. He stayed riveted and focused on both his dreams and God. He endured under impossible circumstances, motivated by his partnership with God.

What are our dreams?

Are we centered with God with our dreams?

Are we willing to have a plan A or plan B?

Do we embrace the light or embrace darkness?