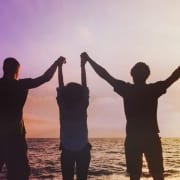 “All who saw it began to grumble and said, “He has gone to be the guest of one who is a sinner”

HANGING OUT WITH JESUS

I remember meeting Rudy Rasmus in a private room with a bishop of the United Methodist Church. He was a talker. He had stories that were riveting, about his past, his ministry, and the poor. He is a pastor for a Methodist church in Houston, but prior to that he had run a bordello. He would admit he was a sinner. He’d come to face Jesus and turned his life around. After passing his tests to become a pastor, he was given a church in one of the poorest sections of Houston. The church had nine members. Undaunted he moved forward with this small church. In a move of pure faith and to get more people to come his church, he started paying one dollar to anyone who would show up.

Today, the church Rudy serves is over nine thousand people strong. Thirty percent of the people were previously homeless. And it is one of the most culturally diverse churches in the country. Rudy attributes the success of the church he pastor’s, to the fact that it contains a group of people who embrace the vision of tearing down the walls of classism, racism, and sexism and building bridges to experience Christ. The church feeds the poor. Builds housing for the homeless. All through a nonprofit called the Bread of Life. The church and Rudy have changed the landscape in downtown Houston. Rudy doesn’t usually preach these days; he leaves that up to the other ministers. Instead he greets church attendees at the door and welcomes them.

In today’s verse we hear people grumbling that Jesus was going to be a house guest of a sinner. This was a frequent activity of Jesus. He dined with sinners. He stayed at their houses. He spent his time in the Judean marketplace helping all who worked there. Jesus views each person as equal. He even converted women of ill repute. Everyone was worthy of God. For Jesus and Rudy, there are no class differences, race differences, or gender differences. We are all God’s people. Jesus hung out with everyone.

When we see a poor person on the street, do we walk to the other side? Do we judge a person or try to understand their circumstance? It is hard to engage on a sincere basis when we meet someone in a situation different than our own. It is hard to not be wary or judgmental. We all wrestle with the idea of hanging out with those who come from a different social stratum. But we don’t know their journey to this point. Perhaps they were once where we are. Perhaps their circumstance arises from an abusive home situation or poor choices from the past. Perhaps they are grappling with a serious medical ailment. Perhaps they were abandoned by their families. We all have one important thing in common: We are all God’s people.

How do we approach new people in our lives?

What judgments do we make?

Can we see God in every person?